To earn a position amongst Europe’s Most Attractive Employers (EMAE), a company must rank in the top 90% of employers within at least four regional markets. If an employer is not listed or is ranked outside the top 90% in a market, it gets a default ranking which is equal to the position of the last company in the top 90% for that market. Results are weighted by GDP, so that a high-ranking position in Germany has a greater influence than a high-ranking position in Belgium, for example.

Despite economic and political uncertainty in Europe, this year’s talent market is extremely stable. This is reflected in both our Business and Engineering/IT rankings which show little change in the top ten in each ranking from the previous year. However, outside of the individual top-tens, there has been a greater deal of movement amongst employers in certain industries.

While Google and Microsoft have continued to captivate European talent, two strong employer brands which should be highlighted from this year’s rankings are Amazon and Adidas, both of which are experiencing a true 3-year increase in all markets across Europe. This year we have seen Adidas jump from 16 to 14 in the business ranking and 51 to 46 in the engineering/IT ranking. Over the same time period, Amazon has climbed from 19 to 17 on the business rankings and 19 to 15 on the engineering/IT rankings.

Explaining the surge in popularity of both companies, Universum’s Global Director, Claudia Tattanelli, said “Over the past 3 years, Adidas and Amazon have worked hard to foster and communicate their very creative and dynamic work environments. Through a series of campaigns and by creating advocacy among their own employees, both companies have been very vocal about their work cultures, not only promising jobs but great career journeys which continue to be very appealing to the new generations in both fields of study.”

High future earnings, professional training and development and leaders who will support development are the top drivers of attractiveness for business talent. However, as we see in the slide below there are many variances by market, which proves that local differences are still quite strong. 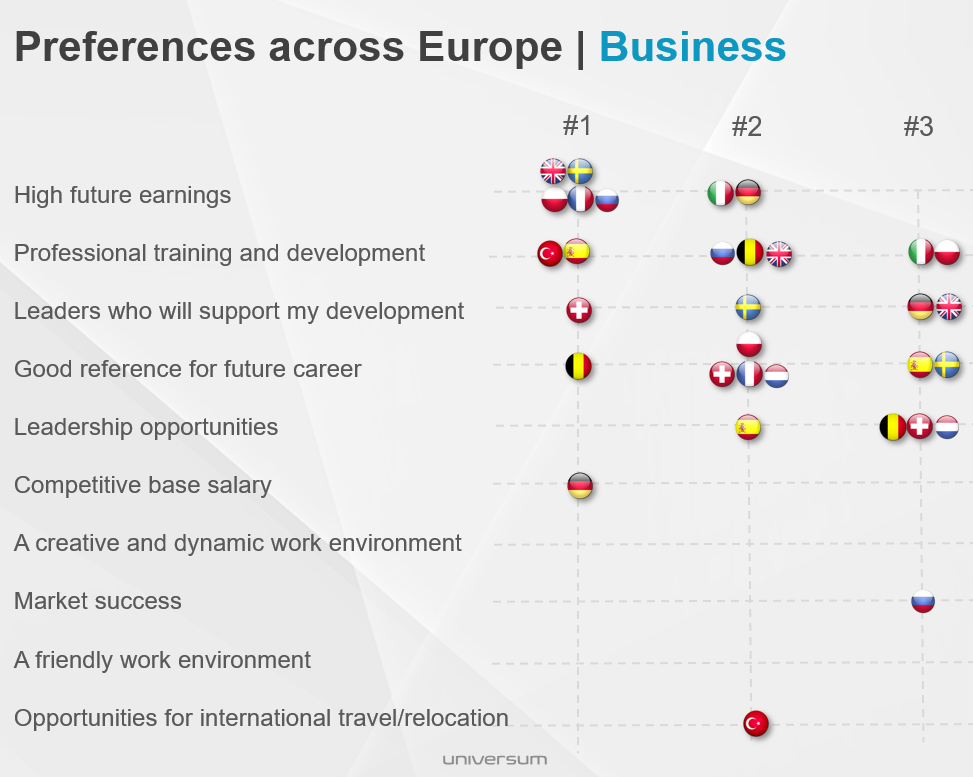 Overall, Innovation remains the top preference for engineering/IT students, followed by high future earnings and professional training and development, however, there are still noticeable differences among talent when we break down preferences by country. 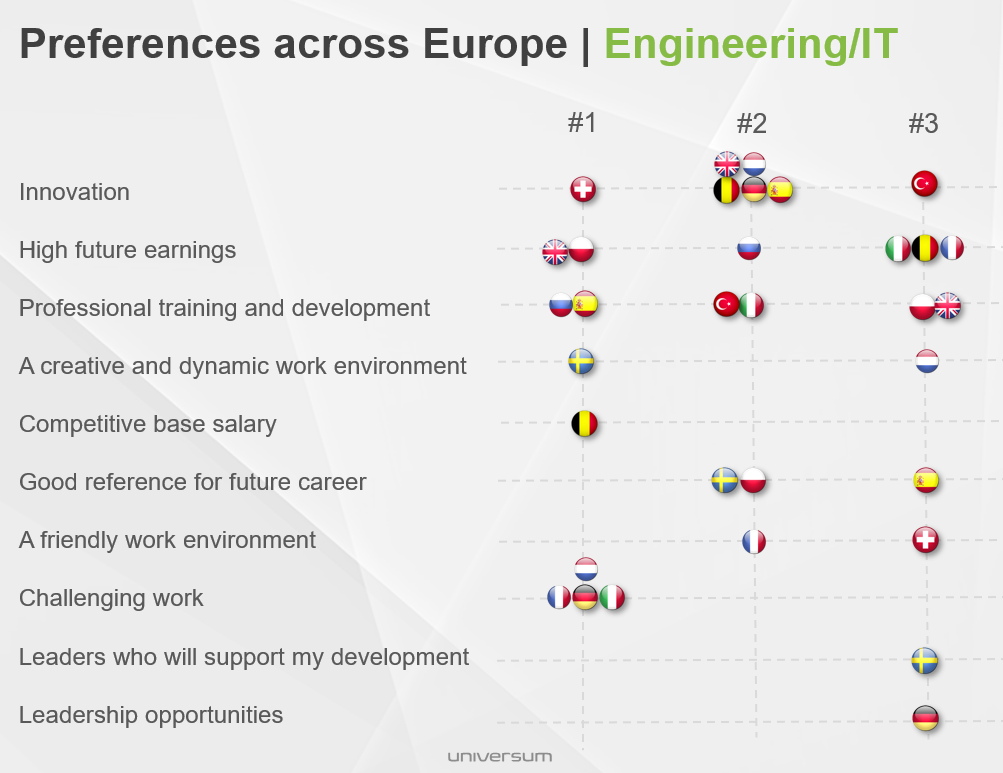 The 2018 European business ranking is incredibly stable with no changes to the top ten, however, there has been a great deal of movement between eleventh and twentieth place. J.P Morgan, took over the eleventh-place spot, pushing Unilever into twelfth place in the process. Nestle is a non-mover in thirteenth place followed by Adidas, which climbed two places since 2017. Procter & Gamble (P&G) and IKEA both fell two spots each since last year and now sit respectively in fifteenth and sixteenth place. Amazon is in seventeenth place after climbing two positions and are followed by fellow climber LVMH (Moet Hennessey Louis Vuitton) which went up an impressive nine places since 2017. BMW fell two places since the previous year and now sits in nineteenth place, in front of non-mover Daimler/Mercedes-Benz.

Describing how this year’s ranking results unfolded, Tattanelli said “the outcome of the 2018 ranking results clearly show how much Gen Z values attractiveness drivers like high future earnings and rapid promotion, both of which are really increasing in importance for this young generation entering the workforce. The offshoot of this is that when we look at the top 50 in this year’s ranking, for the most part, banks seem to be collectively increasing their ground.”

Tattanelli finished by highlighting the rise in popularity of professional services firms among engineering talent “The majority of professional services firms have continued to gain ground in the engineering/IT ranking. Although none are present in the top 10, Mckinsey & Company and BCG have remained within the top 15, while PwC jumped from 32 to 24 and EY also made impressive gains leaping from 37 to 26.

She continued “We aren’t totally surprised by these advances among the employers in the professional services industry, as year upon year we have witnessed the incredible amounts of effort they have invested to hire, recruit and retain the STEM talent they require to lead the transformation of their industry.”

Universum is the global leader in employer branding, during our 30 years, we have established ourselves in 60 markets globally, and our diverse workforce is physically present in 20 countries. Our services include actionable research, strategic advisory, data-driven communication and social media solutions for talent branding, sourcing, and analytics. A trusted partner to over 1,700 clients, including many Fortune 500 companies, as well as global media partners that publish our annual rankings and trend reports. We work with over 2,000 universities, alumni groups, and professional organizations to gather insights from students and professionals in order to advise employers on how to attract and retain talent that fits their culture and purpose. On an annual basis, Universum surveys over 1,000,000 students and professionals worldwide. Find out more at www.universumglobal.com.

Any cookies that may not be particularly necessary for the website to function and is used specifically to collect user personal data via analytics, ads, other embedded contents are termed as non-necessary cookies. It is mandatory to procure user consent prior to running these cookies on your website.